Most of our Neighborhood articles concern events; this is about a place — one at the heart of Boston’s literary heritage — the Old Corner Bookstore. At School and Washington Streets, it literally is around the corner from our office.

Anne Hutchinson (the woman who helped found Rhode Island) built a house at that site in the 1630s. In 1711 it was destroyed by a fire that consumed over a hundred buildings. To avoid similar losses, Boston prohibited wooden buildings in the center of town.

The current structure was built in 1712 and is one of the oldest brick buildings in Boston.2 Originally used as a residence and apothecary shop, bookselling came to the site in 1828. Publishing was added in 1832 by William Ticknor. His firm, later known as Ticknor and Fields, was publisher to a veritable who’s who of 19th century American writers, including Emerson, Hawthorne, Oliver Wendell Holmes, Longfellow, Harriet Beecher Stowe and Thoreau.

Ticknor pioneered the practice of paying royalties to popular foreign authors, whose works were not protected by U.S. copyright law at the time.4 In exchange he received advance copies of their books. Charles Dickens and Alfred, Lord Tennyson were two of these authors. 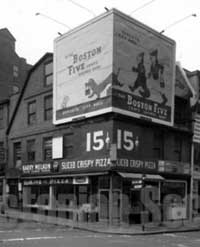 Many writers today like to gather in coffee shops. It seems the same was true in the nineteenth century. A popular retreat for visitors to Ticknor and Fields was Mrs. Haven’s coffee-house, a few doors away on School Street. Known for its “peculiarly rich, thick lemon pie,” its “exhilarating boiled coffee” was suspected of having a slight infusion of brandy.5

When Ticknor and Fields left in 1865, other booksellers moved into the location. The Old Corner Bookstore continued there until 1903. 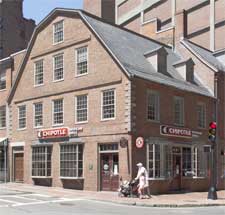 The building’s fortunes declined in the first half of the 20th century. By 1960 it was a pizza shop and demolition was being considered as part of building the “New Boston.”

Historic Boston was incorporated to save the building. It purchased and renovated the property and used the upper floors as its headquarters. For years the building was home to Globe Corner Bookstore, which specialized in globes, maps and travel books. More recently it housed a retail store for The Boston Globe. Today it is home to a Chipotles restaurant.

Continue to >> Boston Massacre
Beginning of Tour << Start Over