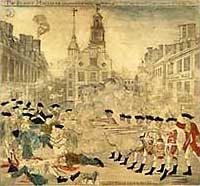 Boston, March 1770. Relations are tense between townsfolk and British soldiers sent in 1768 to enforce unpopular laws.

On the evening of March 5th, local gangs begin taunting and throwing snowballs at a soldier guarding the Customs House. He sends for help. 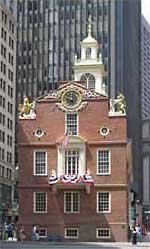 More soldiers arrive, more colonists as well. More objects are thrown. Then church bells begin to peel. In 1770 Boston that usually meant something was burning. Chances are someone shouted “fire!” Whether it was a colonist sounding the alarm or a British officer, we’ll never know. But the outcome we do: five dead colonists.

Paul Revere’s engraving (top) shows the incident occurring outside a building that then was home to the royal courts and council. After independence it became our first State House.

The Declaration of Independence was read to the public from the building’s balcony on July 18, 1776. Since then, it has been read from that balcony every year on July 4th.

The Old State House is at the intersection of State and Congress Streets. The five colonists who were killed are buried in the Granary Burying Ground on Tremont Street.

Continue to >> Boston Tea Party
Beginning of Tour << Start Over