Home > Just for Fun > In Our Neighborhood > First Fire Alarm 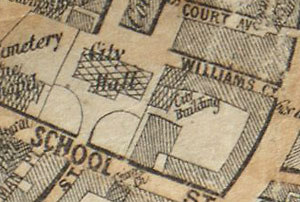 It is sometimes difficult to imagine that things we take for granted weren’t always there. One would be the ubiquitous network of fire boxes — someone pulls an alarm and firefighters arrive.

Before 1852 it wasn’t like that. Even though Boston has had paid firefighters since 1678, alarms were usually sounded by ringing church bells. Firefighters arriving on the scene had to search for the actual blaze.

Samuel Morse (born in Charlestown, MA) invented the telegraph in the 1830s. Commercial telegraph service was introduced in 1844.

A Boston physician, Dr. William F. Channing, thought that this technology could be adapted to create a fire alarm system. With Professor Moses Farmer, an electrical engineer, he developed the system and convinced the city of Boston to build it. 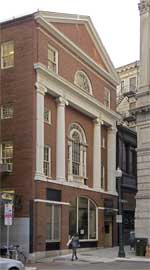 The first Fire Alarm Office was located in a city-owned building at 21 Court Square. It began operation on April 28, 1852. The first alarm was received the next evening. Channing and Moses were granted U.S. Patent 17,355 on May 19, 1857.

The location of the Fire Alarm Office is at the corner of Court Square and Pi Alley. Today this location is probably best known as the long-time home of the Kirstein branch of the Boston Public Library, although the library recently moved to Copley Square.

Continue to >> Invention of Telephone
Beginning of Tour << Start Over