Two of the most galvanizing events in 19th century Boston took place in Court Square right outside our doors: the trials of Thomas Sims and Anthony Burns. Both men had escaped slavery in the South and were arrested in Boston by bounty hunters under the newly-enacted Fugitive Slave law.

Sims came to Boston in March 1851 and was arrested on April 4th. During his trial, the court house was surrounded by chains — judges and lawyers had to crawl under them to enter. A plan for Sims to escape by leaping from a third-floor window onto a pile of mattresses was thwarted when deputies barred the windows at the last-minute. The court ruled against Sims. He was marched down State Street at 4:00 a.m. surrounded by guards, placed on an armed ship and returned to Georgia.

Boston abolitionists were dismayed by their failure to save Sims. When a similar situation arose in 1854, they responded more forcefully.

Anthony Burns was arrested while walking on Court Street. He was held in the same court house as Sims.

On May 26, 1854 a group of abolitionists, including a number of prominent Bostonians, stormed the court house in an attempt to free Burns. Thirteen people were arrested and a US Marshall was killed. 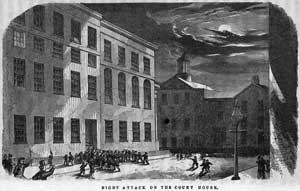 Federal troops were sent in to preserve the peace; cannon were stationed in Court Square. The Court held against Burns. Like Sims, Burns was marched down Court and State Streets to a waiting ship, but this time the streets, roofs and windows along the way were filled with protesters — contemporary accounts estimated as many as 50,000.

Abolitionists purchased Burns’ freedom for $1300. Sims escaped in 1863, made his way to General Grant’s forces and returned to Boston.

The court house where these trials were held stood in Court Square until 1909, when it was torn down and replaced by a municipal building that now is home to the Boston School Committee. 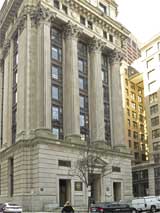