Think how successful we would be if we could know tomorrow’s news today. The advantage, of course, is the same if we know yesterday’s news today when no one else will learn it until tomorrow. For generations it has been the publisher’s quest not only to have all the news, but also to have it first. And they have gone to great lengths to get it — after all, if it’s old it isn’t news.

The Need for News. Cavemen meeting at the water hole probably exchanged grunts about good hunting spots and passing strangers. From around 130 B.C. the Romans published the Acta Diurna, a daily list of legal matters, births, deaths and marriages. Wealthy Romans sent their secretaries to the Forum to get the latest updates.

Weekly printed newspapers began in the seventeenth century. The need to fill each issue with new information created pressure to find stories and publish them ahead of the competition.1

The Race to Be First. Before regular trans-Atlantic telegraph service began in 1869 it took ten days or more for news from Europe to reach the U.S. See How Did People Get by Without Computers? So a reporter for The Boston Daily Mail, J. Daniel Craig, regularly went to Halifax whenever new European papers arrived. He bought them and immediately boarded a ship back to Boston. En route he wrote summaries of the leading stories. When his ship was about 50 miles from Boston, he released carrier pigeons, which typically got the stories to his paper’s Boston office about six hours before competitors received their papers by ship. New York competitors were so angry they tried to get the ships’ captains to shoot the pigeons.3 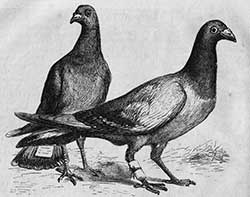 A similar service in Europe gave birth to one of today’s largest media empires. In the 1840s the French telegraph lines went as far east as Brussels and the German lines as far west as Aachen. This 76 mile gap meant that German investors wanting to trade in France and French investors wanting to buy in Germany had to rely on stale data. Paul Reuter sensed an opportunity and began a carrier pigeon service between Aachen and Brussels. Subscribers got prices hours before anyone else.

The Aachen to Brussels telegraph gap was soon closed, but Reuter recognized the value of timeliness. To speed European receipt of news from America, he built a private telegraph line from England to Crookhaven, Ireland. News dispatches in water-tight containers were dropped into the ocean as ships from America passed Crookhaven. The dispatches were then retrieved, taken to the telegraph station and transmitted to England. In April 1865 this then new service broke the story of a lifetime, reporting the assassination of President Lincoln hours before anyone else.

The Quest Continues. The completion of world-wide telegraph lines in the nineteenth century and the advent of radio in the twentieth made it possible to file stories from almost anywhere. But images and video still had to be physically transported to the publisher. For years, networks, wire services and newspapers employed motorcycle couriers to race film from the airport to their offices. 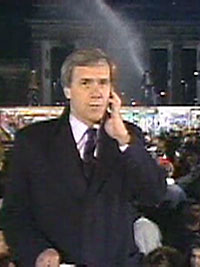 The Internet and satellites have changed that. In 1989 The New York Times sent electronic publishing equipment to San Francisco so pictures from the World Series could be sent to New York in time for the morning edition. Little did they know that this then cutting-edge gear would be central to their coverage of the 1989 San Francisco earthquake.

A few weeks later NBC scooped the competition with live video of the fall of the Berlin Wall. It came about because the network’s foreign news chief was convinced something big was about to happen. A team was sent to Berlin and began setting up for live broadcasts with the wall as a backdrop. Then on November 9 it was announced that East Germans would be allowed to travel to the west. Crowds of East Germans went to the wall to see if it was true and the rest is history. NBC broadcast it live to the U.S. Everyone else had to make due with recordings.6 You can see the historic broadcast on the NBC News web site.

The 24-hour news cycle measures time in seconds, not hours. Satellite networks enable remote transmission from anywhere on Earth and citizen reporters with digital cameras can publish images of an incident long before professional journalists arrive.

Those who must make decisions based on the news race to keep up. Supercomputers scour Twitter feeds for posts that might affect stock prices while intelligence agencies struggle to identify meaningful events buried in a sea of worthless chatter. Today more than ever, the ancient Latin aphorism is true — Scientia est potentia — knowledge is power.