How GPS Came to Be

Where do good ideas come from? Thomas Edison said genius is one percent inspi­ration and ninety-nine percent perspi­ration.1 Author Steven Johnson suggests that work environment and social interactions play a role as well.2 He uses the development of GPS as an example. Here is the story.

Nobody set out to invent GPS, it evolved through a confluence of people and events. Things began with the Soviet Union’s launch of the first man-made satellite, Sputnik, in October 1957. It was big news in the U.S. and a logical topic of lunch-time conversation for two young physicists at Johns Hopkins’ Applied Physics Lab, William Guier and George Weiffenbach. 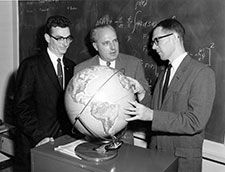 Sputnik broadcast a radio signal that could be tracked from Earth. After lunch Guier and Weiffenbach went to Weiffenbach’s office to hunt for the signal on a radio he had there for experiments. Once word got out that they had found it, others came to listen. Realizing that they were hearing history being made, they recorded the tones on Guier’s personal tape recorder.

Then they noticed that the signal changed as Sputnik passed overhead just like a siren racing toward you sounds different from one going away. This change is explained by the Doppler effect. Applying Doppler formulas they figured out Sputnik’s speed and later developed a method for computing its position.5

Realizing there might be serious science here, Guier and Weiffenbach got permission to use their lab’s new UNIVAC computer to do further calculations. In the end they plotted Sputnik's orbit solely from the radio signals.

So how did this scientific curiosity lead to a global technology? Shortly after Guier and Weiffenbach finished their work, their boss, Frank McClure, asked them whether their technique would work in reverse — could a signal from space be used to calculate the position of an object on Earth? McClure knew the Navy would be very interested if it could since its new nuclear submarines needed a way to determine precise location without tracking the stars.

Guier and Weiffenbach checked their figures and concluded it would work. Within six months of their first hearing Sputnik, their lab began work on a system for the Navy. Satellites were launched three years later.

It took years and the efforts of many others to build the entire GPS network, but the essential ideas evolved from two curious young scientists’ lunch-time conversation. Imagine if their boss had insisted they stick to their jobs and not “waste time” listening to Sputnik.