Mention San Francisco or Chicago’s great fires and there’s immediate recognition — they’re the largest urban fires in U.S. history. But few know that third place goes to Boston,1 where much of the commercial district was burnt to the ground in 1872. Sixty-five acres and 776 buildings were destroyed; insurance companies went bankrupt. Boston responded with a can-do spirit and rebuilt within two years.3

Anything That Could Go Wrong Did. The fire began in a basement around 7:00 p.m. The building was granite and only six years old, but its wooden roof and five floors filled with fabric and clothing made it a tinderbox. Firefighting efforts were hampered from the start. 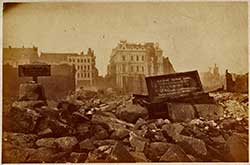 Ruins at Federal and High Streets.4

Fire call boxes had been locked to prevent false alarms, so the first alarm was delayed 15 to 20 minutes until a police officer hearing the commotion arrived with a key. Then fire engines had to be pulled by men since most of the city’s horses had been stricken by an equine epidemic.

Flames spread rapidly, easily leaping across narrow streets to buildings with wooden roofs and attics filled with inflammable goods. Many buildings were too tall for fire hoses and water pipes designed for the formerly residential district were too narrow to deliver sufficient pressure. Their capacity was further reduced by corrosion due to age.

And this was the gaslight era. Gas mains for street lights and buildings remained open, fueling the fire. There were no master valves to shut off an entire street, so the flow continued until firefighters shut off buildings one by one.

Heroic Efforts. At the scene Chief Damrell sounded a general alarm and ordered an assistant to request help from all departments within fifty miles. Eventually help arrived from every New England state except Vermont, some companies leaving their own towns with little or no protection. 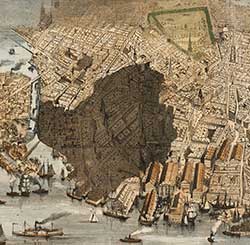 The mail was quickly removed from the main post office to safety at Faneuil Hall. Residents and businesses removed valuables and for days Boston Common was filled with salvaged goods.

Nothing seemed to work, so late at night several prominent citizens demanded that buildings be destroyed to create a fire wall. Chief Damrell, who had visited Chicago to study that city’s fire, knew the risks and advised against it. Under pressure he authorized the use of gunpowder. It was not successful.

The fire destroyed Trinity Church, four of Boston’s newspaper buildings and was proceeding up Milk Street to the historic Old South Meeting House. See Where the Real Tea Party Started. Firefighters battled through the night to save the building while citizens stood on its roof to stomp out sparks. The building was saved when firefighters arrived by train from Portsmouth, New Hampshire with a steam-powered fire engine.

Aftermath. The fire, which began Saturday evening, was finally brought under control Sunday afternoon, although flames and explosions continued through Monday. 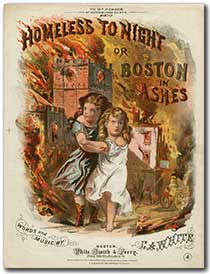 The loss of property was great: 776 buildings destroyed; 20 of 33 insurance companies bankrupt; ten percent of all raw wool in the United States destroyed. About 1000 were left homeless and 20,000 unemployed. Loss of life was about 30, fortunately far fewer than the 300 who had perished in Chicago the year before.

Boston got to work on Monday. Mail was delivered and newspapers published. A relief fund was established to provide for firefighters, homeless and unemployed.

Much of the debris was used as landfill in the area around Atlantic Avenue. To prevent future fires, some streets were widened and gas mains given master valves so they could be shut down. Within two years the burnt area showed few signs of the conflagration.

Today the area ravaged by fire is home to beautiful Post Office Square park and some of Boston’s shiniest towers. One tiny marker commemorates one of our nation’s worst civic disasters. In a city that celebrates its history, the Great Fire of 1872 has largely been forgotten.