The Way We Were

Photographs literally freeze moments in time. They capture a place and the people in it exactly as they were and make them immortal. Photography was introduced to Boston in 1839, the very year in which Daguerre took his first pictures in Paris. Many of Boston’s earliest photographers opened their studios near to Court Square. Their legacy is a photographic history of Boston that certainly is unsurpassed elsewhere in the United States.

The photo of School Street in the 1850s is taken from Washington Street looking West toward Beacon. It includes buildings we still pass today: Kings Chapel and the Old Corner Bookstore. The store fronts include many printing businesses, a barber shop, a tailor, a statuary studio, and a sign advertising “Females as Accountants.” The photographer is Josiah Hawes, one of the pioneers of American photography.

The 1909 photo at the left shows the layout of Court Square as it has been for 200 years: a courthouse at the center, Court Street in front, and the streets on the sides and back being Court Square. In this picture our office would be at the far left, across the street from the courthouse.

This picture from 1907 shows the same location bustling with activity. The building with the awnings is Young’s hotel, a prominent Boston hostelry from 1860 to 1927. Notice the gentlemen wearing the latest fashion straw hats, a lemonade stand selling drinks for 5¢ and not an automobile in sight. 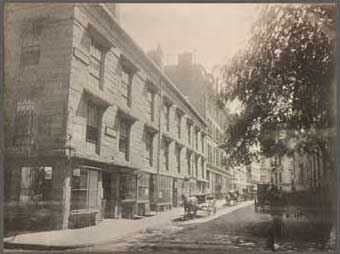 Court Square in these pictures looks much as it does today: stone, cement, not a single tree. But 40 years before, the scale was smaller and a few trees and gas lights gave the scene a softer feel. The picture below shows Court Square in 1870. The building on the right is the same courthouse seen in the 1907 and 1909 photos.

Beginning of Tour << Start Over