Why the New Year Begins on January 1. 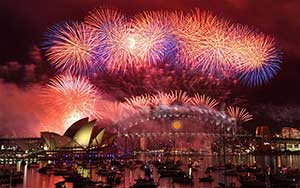 Come Jan­uary 1 fireworks will explode and champagne corks pop all around the world as we celebrate the arrival of a new year. But why Jan­uary 1 — it has no special astronomical, religious or civic significance? As with much of our world the story is a curious blend of science and religion with a dash of human vanity thrown in for interest.

The Science. Pretty much every calendar is based on celestial cycles: days (sunrise to sunrise); months (Moon phases) and years (Earth orbits). But astronomically the year can begin any time. Even today traditional calendars have different start dates: Chinese New Year between January 21 and February 20, Nowruz (Persian) usually on March 21 and Jewish New Year in the fall. The Chinese and Jewish dates vary because those calendars are based on lunar cycles not Earth orbits.

The traditional Roman calendar was based on lunar months and started in March. The seventh through tenth months were called September, October, November and December. There were also months named Quintilis (fifth) and Sextilis (sixth), but as we’ll see, those names were changed.

The problem with lunar calendars is they get out of sync with the seasons. A lunar month goes from one new Moon to the next: about 29½ days. Twelve cycles add up to 354 days — 11 days short of the full Earth orbit that determines the seasons. Since activities like farming depend on seasons, every lunar calendar needs some method to keep it in sync with the Sun.

The Romans periodically added extra months to compensate, unfortunately not always at the correct time. Sometimes the calendar was manipulated to lengthen or shorten the terms of political leaders. By 46 B.C. the Roman calendar was two months off. 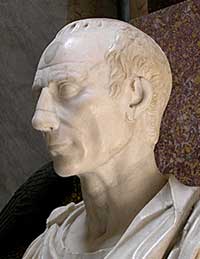 The Human Element. Enter Julius Caesar. He learned of Egypt’s solar calendar while commanding his armies there (that’s when he met Cleopatra). Back in Rome he called upon the Alexandrian astronomer Sosigenes to fix things.

They devised the calendar we use today: twelve months of 30 or 31 days, except February with 29. An extra day was added every four years since a full solar cycle is about a quarter day longer than 365 days. And the year was declared to start in January, although as time passed some regions including Britain kept the Julian calendar but moved the start of the year.

Naturally the master of the Western world had to have a month named for him so the Senate voted to change the month Quintilis to Julius (July). When Augustus took over, it was decided he should have a month too, so Sextilis was changed to Augustus (August). And since his month couldn’t be shorter than his uncle’s, a day was moved from February to August so it had 31 days like July.3

Overtones of Religion. This system wasn’t perfect and added one day too many every 128 years. In 1582 Pope Gregory XIII corrected this by decreeing that years ending in “00” would be leap years only if they were multiples of 400, thus 2000 was a leap year, but 1800 and 1900 were not.

But unlike Julius Caesar, whose writ ran throughout the Western world, Gregory’s decrees as Pope were inherently suspect in Orthodox and Protestant countries and thus not followed. That is why when George Washington was born in 1732 the Protestant British calendar in colonial Virginia showed his birth date, which we celebrate on February 22, as being February 11.

Britain adopted the Gregorian calendar in 1752. The same Act also moved the start of the year from March 25 to January 1. But even 250 years later vestiges of the old system remain — the British tax year begins on April 6, which is March 25 adjusted from the Julian system.4 Probably makes sense if you drive on the left.

By the way, Orthodox Russia only adopted the Gregorian calendar in 1918 and Greece in 1923.5