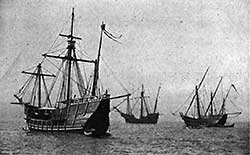 Every year we celebrate Columbus Day — a long weekend, perhaps a few big sales. But few believe Columbus really got here first. So who did and why don’t we know for sure?

Why Does Columbus Get Credit? He had good PR, was sponsored by royalty and wrote an account that was published throughout Europe.2 And he was in the right place at the right time; late fifteenth century Europeans were looking for a sea route to China.3

We remember winners. We know Bill Gates and Steve Jobs because we use their products every day. Neither invented the personal computer. Those who did are already mostly forgotten.

Who Really Was First? We’ll never know for sure; new leads arise daily. Archeological evidence establishes that Vikings visited North America around 1000 A.D. And we know the 15th century Chinese sailed fleets of large oceangoing vessels to Africa, India and Indonesia. Claims they came to America are unsubstantiated, but their ships and navigators certainly were capable of making the trip. Wikipedia has an article listing dozens of theories.4

Recreation of Norse House in Newfoundland.5

One intriguing possibility is that ships from Bristol, England reached America decades before Columbus. We know that John Cabot sailed to America from Bristol in 1497. A recently discovered document says that Cabot was given funds to find “the” new world. That could not have meant the islands Columbus reached since everyone thought they were near the Asian mainland, not someplace new. A Bristol merchant who may have been spying on Cabot’s voyages for Columbus sent him a report referring to the place Cabot visited as having been “discovered in the past by the men from Bristol who found ‘Brasil’ as your lordship knows.”

A British historian, Alwyn Ruddock, claimed to have had proof that Bristol merchants reached America before 1470. She spent years researching the subject, but unfortunately never published her findings and had all of her records destroyed upon her death. Researchers are trying to reconstruct her work; that is how the funding document mentioned earlier was found.6 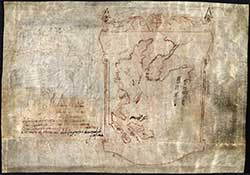 One of the Marco Polo Maps.8

Traditional inquiry has focused on European explorers, ignoring other seafaring cultures. Maps of Macro Polo's journeys passed down through family suggest he visited Alaska, or had information from others who had. One of those maps mentions a land called Fusang.7

Fusang was the Chinese name for a distant place across the seas. Tradition has it that around 500 A.D. a Buddhist missionary, Hui Shen, traveled there to spread his faith. Adherents of this theory point to the introduction of Buddhist elements into Mayan art around this time.9

Perhaps the most intriguing story is that of Abu Raihan al-Biruni, a 11th century Islamic scholar who posited the existence of America without leaving land. As a young man he computed the location of his own town and began collecting those of others. He measured the circumference of the Earth within 10 miles of the true size. 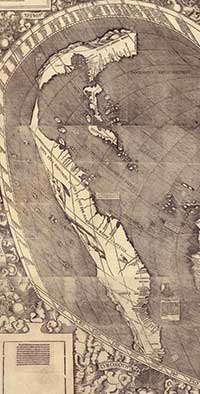 Plotting these locations on a map, Biruni saw they covered only two-fifths of the globe. He felt a world with all solid matter on one side would wobble and concluded there must be unknown lands in the “empty” areas. He even reasoned they most likely were not in polar regions and therefore were inhabited.10

Unsolved Mysteries. People keep seeking answers because there are still unanswered questions. For example, how can a 1507 world map show fairly accurate Pacific coastlines for America decades before European explorers supposedly got there. And what of the stone anchors found in American waters that are similar to those used by Chinese ships.

Will We Ever Know? Probably not; most of human history is unknown. Oral histories are lost or distorted by time. Records are willfully destroyed: Spanish conquistadors erased much of pre-Columbian cultural memory in their zeal to “convert” locals. Maps and accounts of voyages were top secret and often destroyed. For example Queen Elizabeth I impounded Sir Francis Drake’s maps and he and his crew were sworn to secrecy on pain of death.

Finally most antiques are simply junk that wasn’t thrown away. Material related to Columbus was kept because he immediately became famous. Items about voyages that didn’t pan out probably were discarded soon thereafter.

It may be that discovering who was first in the New World will prove more difficult than finding it was in the first place.