There is so much depressing news these days it seems like a good time to talk about something uplifting, like love. And with the traditional lovers’ holiday coming up next week, the topic seems obvious — Valentine’s Day — where it comes from and why we celebrate it.

Roman Origins. The February celebration of love and fertility, like so much of our culture, can be traced to ancient Rome. February 13 to 15 was the festival of Lupercalia, which included a fertility rite where men dressed in goatskins would flail women with strips cut from the hides of dead goats they had sacrificed. The ritual was said to promote fertility, or at least that is what the men told the young women who lined up, sometimes naked, to receive the floggings.2 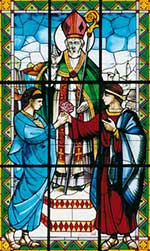 Then who was he? It is hard to say. There are many Saints Valentine, two of whose feast day is February 14th.

Valentine’s Day usually is associated with an Italian Bishop who lived during the reign of Emperor Claudius II. Needing troops and believing that single men made better soldiers, Claudius forbade young men to marry. Believing marriage to be a holy sacrament, Bishop Valentine continued to marry young couples in secret. Eventually he was caught and executed.

Legend is Valentine befriended one of his jailors and converted him and his family to Christianity. The jailor’s children exchanged notes with Valentine and shortly before his death the Bishop signed one “from your Valentine.”

Valentine was martyred on February 14, 273. In 496 Pope Gelasius I declared February 14th to be the feast of Saint Valentine. 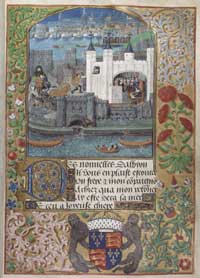 How Did Valentine’s Day Become Romantic? The Roman Lupercalia certainly was’'t romantic, nor is the execution of a priest, so how did Saint Valentine and his feast become associated with lovers?

In the Middle Ages people believed birds started mating around the time of Saint Valentine’s feast, thus connecting the date with romance. In a poem written to honor the first anniversary of a royal engagement, Chaucer refers to Valentine’s Day as being when every fowl [bird] chooses his mate.4

Not long afterward, a French duke imprisoned in the Tower of London writes to his wife that “I am already sick of love, my gentle Valentine.” A few years later an English girl calls her fiancé her “well-beloved Valentine.”6 Shakespeare makes it official in Hamlet where Ophelia says:

“To-morrow is Saint Valentine’s day,
All in the morning betime,
And I a maid at your window,
To be your Valentine.”7 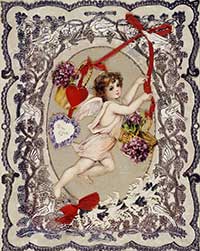 Modern Celebration. Colonial Americans had some Valentine’s Day customs, although they weren’t widely observed. Some women put bay leaves on their pillow and if they dreamt of their sweetheart they would be married by year’s end. A magic potion involving a boiled egg was said to ensure success. Others believed the first man a young woman saw on Valentine’s Day would become her spouse. To be safe, many girls kept their eyes closed until advised that the desired beau was in sight.9

Lovers in Britain and America began exchanging cards and small gifts on Valentine's Day in the seventeenth century.10 Lovers lost for words could look to The Young Man’s Valentine Writer for sentimental verses.11 Pre-printed cards emerged in the nineteenth century, but really took off in 1847 when Esther Howland of Worcester, Massachusetts got the idea to mass produce them. She hoped for $200 in sales the first year; her salesman returned with orders for over $5,000. Sales exceeded $100,000 by the time she sold the business.12

Today lovers around the world observe Valentine’s Day, even in some countries where they have never heard of a Third Century Catholic saint.13 Have a great time however you choose to celebrate.