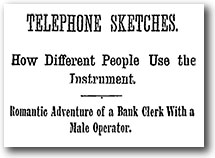 Alexander Graham Bell was 29 when he invented the telephone in 1876. It was an immediate success and he and Thomas Edison were the Bill Gates and Steve Jobs of their day. But the telephone wasn't all business; even then it had a lighter side as is seen in this 1883 story from The Boston Globe.1

“Among the employes [sic] at the central office is a boy, whose voice has not yet taken on the bass tones of manhood, but is still of a pure soprano quality. He substituted for a young lady operator one day, and in the course of his duties was seen to smile very broadly.

“His nearest neighbor, a young lady, seeking to find the cause of his amusement, was told that a bank clerk up town was trying to flirt with him. No sooner said than the lady connected this particular bank clerk with all the operators in the room, and all of them took in the conversation, including the answers dictated to the boy by his lady friends.

“The up town masher exulted in his easy conquest, and appointed a meeting, saying that when the central office closed he would station himself in a certain doorway on Pearl street, and that the fair damsel might know that he was the proper party by the nosegay he would wear in his buttonhole. 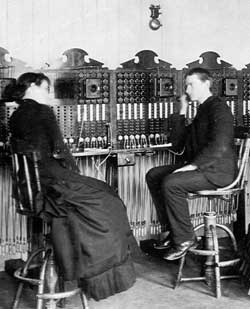 “At the appointed time about a dozen of the girls proceeded to walk leisurely up Pearl street, in groups of three and four. In the stated doorway stood the hero, faultlessly arrayed with kid gloves and cane, and the aesthetic bouquet.

“As the first group approached he ran his eye pleasantly over their faces, in search of some token of recognition. But they passed him by laughing, in their sleeves. The same treatment was given by the next group, who could scarcely restrain their laughter at the excitement of the elegant young man. As the last group approached his excitement got the better of him and he stepped lightly forward, bowing and smirking, and said in his most captivating way, ‘Which one is it? which one is it?’

“The girls mastered the situation sufficiently to repress the faintest shadow of a smile and coldly stared at him without a word and passed on. When that young man attempts to flirt again, he will be likely to choose some other than a telephone operator.”

In today's parlance, this story went viral: it appeared in publications throughout the U.S. and even in the Wanganui Record (New Zealand).

The more things change, the more they stay the same.