An Invention that Shrank the World 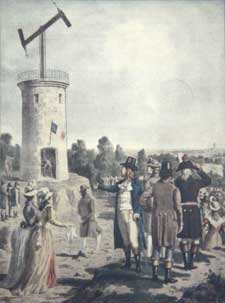 We take instant communications for granted. Our parents and grandparents did as well. In 1865 news of Lincoln’s assassi­nation was in all the papers the next day. But fifty years earlier the Battle of New Orleans was fought because word of a peace treaty had not reached New Orleans in time. What happened between these dates? Invention of the electric telegraph.

Early Telegraphy. The word telegraph combines the French words télé (at a distance) and graphe (writing). The ancient Greeks had mechanisms to transmit signals from hilltop to hilltop and Roman legions may have used signal flags to send messages along Hadrian’s Wall. But the first extensive signaling network was developed by Claude Chappe in France in the 1790s.

The system consisted of a series of towers with signal arms. Originally used by the revolutionary French government to coordinate defenses against royalist forces, the system eventually expanded to 556 stations and covered 3,000 miles.

Electric Telegraphy. Signal tower networks require clear weather, don’t work well at night, and are slow — messages have to be relayed from station to station. With the arrival of electric technology in the 19th century, inventors began looking for ways to send messages by wire.

One of them was an American artist working in Paris, Samuel F.B. Morse. While studying at Yale he had been interested in electricity. In France he saw the Chappe telegraph and on the voyage home in 1832 people were discussing Faraday’s new electromagnet. Morse thought electromagnets might be used to send coded messages.

With the help of colleagues, Morse built a working electric telegraph and sent his first message in 1838. In 1844, he sent the famous message “What Hath God Wrought” from the Capitol to Baltimore.3 Morse’s was not the first electric telegraph but it was simple, reliable and practical. Commercial telegraph service began in the United States in the 1840s. Transcontinental telegraph service was established in 1861, and permanent trans-Atlantic service in 1866.4 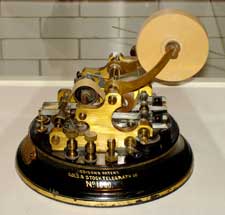 Impact of Electric Telegraphy. Telephone, radio, television, the Internet — they add sound, pictures and wireless. None, however, is faster than the telegraph. Telegraphy made possible numerous technologies central to the evolution of commerce and industry. To list just three —

Fire Alarms (1852). Fire alarm call boxes were a direct outgrowth of telegraphy. Originally they were called an “Electromagnetic Fire Alarm Telegraph for Cities.”