There’s No Limit to How Far a Young Person Can Go. 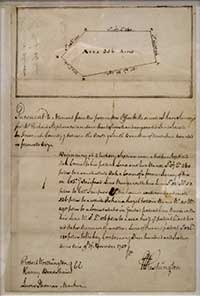 The Boston Public Library recently displayed surveying tools and a 1750 site plan as part of an exhibit about the American Revolution. Most people walked right past the small case, but the site plan may have been the most interesting item in the multi-room exhibit. You just had to look closely to learn why.

A Young Surveyor. The exhibit label noted that the person who drew the plan was eighteen years old. Granted in the 1700s young people often had to work, but in our era of no-pay internships and young people having trouble getting started, it reminds us that every one of us once had a first job where we could show what we could do.

Our young surveyor had little formal schooling — his training was a few practice surveys, including one of his older brother’s turnip garden. His big break came when he was asked to assist in a month-long survey for Lord Fairfax, the largest landowner in Virginia. Senior people did the actual surveying, but Fairfax took note of George, the apprentice’s, intellect and dependability. Fairfax helped George secure appointment as surveyor for Culpeper county. The library’s survey was made as a private commission two years later.2

This experience helped prepare George for bigger and better things. His map-making skill proved useful during the French and Indian War when he joined the Virginia regiment, rising to the rank of lieutenant colonel. He wore his Virginia colonel’s uniform to Philadelphia twenty years later when he presented himself to the Continental Congress ready to lead the new Continental Army. The young surveyor was George Washington.

Dopey. George got his chance at an early age and ran with it. For others it takes longer, as it did for a German kid whose family maid referred to him as the “Dopey” one because he seemed kind of “slow.” 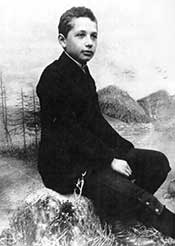 Dopey's early years showed little promise — his record for serial disappointment rivals that of the Chicago Cubs. He trained to be a teacher, but was the only person in his class who didn't get a teaching position. He bounced from one temporary job to another. Finally a friend helped him get a position as a government clerk. Even that took six months.

Dopey liked science and often pondered exotic questions. Papers at work on synchronizing clocks at remote locations got him thinking about space and time. One evening he remembered watching a clock tower while riding the streetcar and wondered what would happen if the streetcar were hurtling through space at the speed of light. That imaginary trip showed him what he had been missing.

The clerk spent the next six weeks writing out his conclusions and published them in a scientific journal. The paper was little noticed until it caught the eye of Max Planck, perhaps the most influential physicist of the day.

With Planck’s support, the clerk was invited to speak at scientific conferences. Within eight years he was director of the Kaiser Wilhelm Institute for Physics at the University of Berlin. Fifteen years later he was awarded the Nobel Prize in Physics. The dopey “slow” kid’s name: Albert Einstein.4

Obviously most of us don’t grow up to be George Washington or Albert Einstein, but the library's site plan reminds us that even those who do started as just kids. And like everyone else, even they had to have a chance to show what they could do. Had they not gotten it, we might be singing God Save the Queen and doing without the technological marvels that rely on Einstein’s theories.