Organizing All the World’s Information — Mundaneum.

To organize the world’s infor­mation and make it universally accessible and useful — that’s Google’s stated mission. It’s been a goal of humanity since the dawn of civilization. Ancient Egyptians created the library at Alexandria. And a similarly ambitious, but largely forgotten project was undertaken in Belgium over 100 years ago — the Mundaneum. 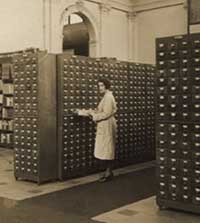 Part of the Catalogue.2

Goal: To Organize the World’s Infor­mation. The idea for the Mundaneum was hatched in 1895 when Belgian lawyers, Paul Otlet and Henri La Fontaine, began work on a classification system for all the world’s knowledge. It had a grand vision: that all of human knowledge was connected; that no idea could be fully understood without knowing its connection to others. Otlet created a method of noting these relationships. He called them "links." Sound familiar?

They wanted to assemble information about every book ever written in any language in one place, called a universal bibliography. The Belgian government provided space in former World’s Fair buildings. At one time the Mundaneum occupied 150 rooms, had a catalogue of 15 million index cards and included collections of books, newspapers, posters and samples of such diverse items as telephones and airplanes.

Goal: To Make It Universally Accessible. This is where things get interesting. Otlet realized that information in Brussels wouldn't be readily available to researchers elsewhere. So he created a fee-based search engine — anyone could submit a question by mail or telegraph.

Decades before Wikipedia, Otlet encouraged users to annotate and add to his repository of knowledge. To overcome the volume of paper, he worked with engineer Robert Goldschmidt to develop a process for making and reading microfilm copies.

Otlet also envisioned a system through which the database could be accessed remotely by telephone lines. Devices he called "electric telescopes" would display images of retrieved documents on flat screens in users’ offices. Sound familiar again?

There’s More. Mundaneum was part of an even more ambitious effort to promote world peace. The Belgian government hoped its support of the Mundaneum would persuade the League of Nations to locate its headquarters in Brussels. The Mundaneum’s building was called the Palais Mondial (palace of the world) and it was hoped that the Mundaneum4 would one day be at the core of a world city. 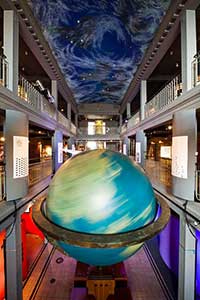 What Happened? How can something so grand be largely forgotten? Times change. The Belgian govern­ment lost interest after the League of Nations located in Geneva. The Mundaneum was forced to move. During World War II Nazi occupiers moved the Mundaneum’s collections again to make room for a display of Third Reich art.

The Mundaneum’s index cards are largely gone, but the remaining archives occupy six kilometers of cartons. In 1998 a Mundaneum Museum was opened in Mons, Belgium. The Google Cultural Institute has a section on the Mundaneum.