How Massachusetts Became Shoemaker to the Country. 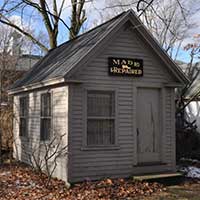 Why is Silicon Valley in California? Why was Detroit once truly the Motor City? Will Boston be the hub of life sciences?

In these cases it is not a matter of geography or something in the water, but more like growth of a tree — many seeds are planted, some take root, a select few give rise to towering forests. Success usually comes from a combination of place, time and nurturing. The growth of the Massachusetts shoe industry provides a telling example.

A Seed Is Planted. Shoemaking in colonial America was done at home — people made their own or traded with neighbors. That changed in 1750 when John Adam Dagyr arrived from Wales and settled in Lynn, Massachusetts. He systematized shoe production by housing four to six craftsmen in a small building called a ten-footer. Eventually these central shops worked with entrepreneurs who marketed and distributed their production throughout the country and ordered specified sizes and styles to be manufactured. By the 1830s this system was producing 15 million pair of footwear annually in Massachusetts.2 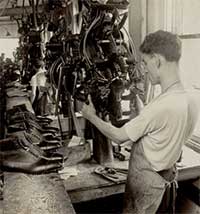 The adage that an acorn never falls far from the tree applies to business expansion as well. The needs of shoe manufacturers spawned related businesses, which tended to locate near their clients. Even shoe factories tended to cluster by speciality with those north of Boston making mainly ladies’ shoes and those to the south men’s. Between 1860 and 1900 Massachusetts firms provided over 40% of the shoe employment in the country and received 40 to 60 percent of the shoe patents.4

A Colossus Arises. Mechanization provided profits not only to shoe manufacturers, but also to those who designed and built the machinery. 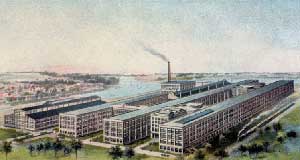 In 1899 five large shoe machinery companies merged to form the United Shoe Machinery Company. It owned seventy percent of the U.S. patents for shoe manufacturing equipment and controlled 98 percent of the business.

United Shoe built a massive factory in Beverly. With ten acres of floor space the plant was so large that messengers got around on roller skates. At its peak the facility employed 6000 people.

The company’s dominance quickly drew the attention of anti-trust regulators and it was embroiled in litigation for years. But the profits of monopoly were good for Beverly and the workers. During the Depression U.S. Shoe Machine’s revenues never dropped more than 15 percent and life in Beverly escaped much of the economic dislocation of the period. 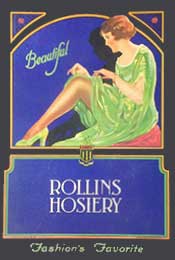 Where Are They Now? Massachusetts dominated the U.S. shoe industry throughout the 1800s. What happened?

Its success was copied elsewhere, sometimes in locations with lower costs. In addition, newer firms often were more adept at adapting to evolving tastes.

The change that turned the footwear industry on its head was rising hemlines of the 1920s. As skirts got shorter, legs became visible and hosiery and shoes suddenly became fashion items. The shoes and stockings that nobody could see under floor-length skirts became passé. Sales of stylish new models took off and with them the profits of companies that made them. Old-line firms that waited for the “fad” to pass saw their market share decline.7

Who knows, fifty years from now people may be visiting artists lofts in the “historic” buildings of Silicon Valley's once dominant technology giants.