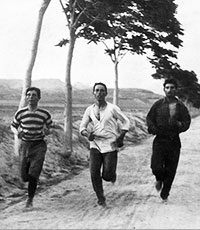 Runners crave the challenge of a marathon. Today’s races attract thousands, but the first marathoner ran alone and expired at the finish line. Yet it is his effort that gives the race its name and distance. What makes this solo run so memorable?

The Plains of Marathon. The very name evokes images of one of Western history’s epochal conflicts — the Battle of Marathon. There 2,500 years ago 10,000 Athenians stood alone against invading Persian hordes.

Persia was the superpower of the day, Greece just a collection of small city-states. Most Greeks submitted to Persian demands, but Athens and Sparta refused. Persia’s King Darius swore vengeance and assembled an attack fleet. 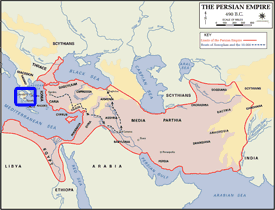 The invasion came at Marathon. For nine days Athenian soldiers watched the Persians prepare for battle. A runner was dispatched to seek aid from their Spartan allies. But as the attack became imminent, Athenian commanders realized they couldn’t wait for help, but would have to fight alone. What ensued was an upset so remarkable it is still studied at war colleges even today.

The Athenians marched directly at the core of the massed Persian forces, advancing ever faster as they neared until they sprinted the last 200 yards. The Persians weren’t expecting such an assault: their formations were hastily assembled and their archers misgauged their targets. Heavily armed Greek hoplites smashed into the Persian lines and achieved a stunning victory.

The Persians retreated and sailed away. Victorious, the Athenians watched in dismay, knowing the Persians were headed south, to attack unguarded Athens from the sea. 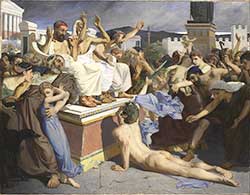 The Marathon Man. A runner was sent to warn Athens and announce the victory at Marathon. Legend is it was Pheidippides,3 the soldier who just a few days before had run round trip to Sparta. He arrived in Athens, delivered his message and died of exhaustion.

Boundaries between fact and legend are often clouded by the mists of time. It is not certain that Pheidippides was the runner, the exact route is not known and why would a 25 mile run kill a trained specialist? There never was a marathon event in the ancient Olympics.

The Legacy. But Pheidippides’ story won the hearts of Victorians enamored with tales of the classical world. Robert Browning immortalized it in an 1879 poem5 and it was celebrated in painting and sculpture. So when the first modern Olympic games were held in Athens in 1896 the organizers promoted a race from Marathon to Athens as one of the featured events. The distance was 40 km (24.85 miles).6

Today marathons are slightly longer, 26 miles 385 yards to be exact. This distance was chosen to accommodate the British royal family at the 1908 London Olympics. That race began at Windsor Castle and continued 26 miles to the Olympic Stadium. A lap of 385 yards inside the stadium was added so that the race would end in front of the Royal box.7

Inspired by the 1896 Olympic marathon, U.S. Olympic Team manager John Graham organized a race for Boston in 1897. Run yearly on Patriots Day, it is the oldest annual marathon in the world.8

So how did things end for the ancient Athenians? We left them on the Plains of Marathon watching the Persians sail off to sack their city.

Exhausted the Athenian soldiers picked up their weapons and began a desperate march home. When the Persian fleet arrived, the Athenian army was there to meet them. The Persians had had enough and sailed home.9