Why We Shoot Fireworks on July 4th.

Fireworks on the Fourth. They’re as American as motherhood and apple pie. But where did they come from, how did the tradition start and why has it continued as times have changed?

Invented in China. Fireworks first appeared in China at least 2,000 years ago when people discovered they could create firecracker noises by throwing green bamboo into fire. The heat exploded air trapped inside. Called pau chuk, this exploding bamboo was used to scare away evil spirits as well as celebrate weddings and New Years.1

More elaborate displays required chemical explosives. The Chinese also invented gunpowder, although it’s not clear exactly when or how. One popular legend credits the discovery to a cook who caused an explosion by mixing saltpeter, charcoal and sulfur, common kitchen supplies at the time. Another says alchemists seeking an elixir of life mixed the same substances with the same result. However it happened, Chinese warriors were using explosive weapons in battle around 1,000 A.D.2

European Fireworks. Fireworks found their way to Europe through the trade routes, Marco Polo brought some back in 1292. They quickly became popular. Elaborate displays created for festivals and royal events included fireworks illuminated towers and rocket propelled pinwheels. Programs ran for hours and were a favorite entertainment of Peter the Great and Louis XIV.4

European settlers brought fireworks with them to America. Jamestown colony put on a display during its first year, 1608. Other colonies followed suit. Colonial fireworks apparently got out of hand, at least in Rhode Island, where the legislature banned them in 1731.

Fireworks and the Fourth. So how does this connect to the Fourth? The day after voting for independence, John Adams wrote his wife that in future years the event should be celebrated:

And so it was. On July 4, 1777, Philadelphia, then our nation’s capital, had festivities all day, concluding with a “grand exhibition of fireworks, which began and concluded with thirteen rockets on the commons.”6 In Boston, fireworks were set off on the Common by Colonel Thomas Crafts.7

The tradition has continued and grown for nearly 240 years,9 even as other customs have changed. George Washington and his men donned green to celebrate independence; today everything is red white and blue. But the allure of fireworks on the Fourth is so strong that Admiral Richard Byrd set off fireworks at his base in Antarctica on July 4, 1934 — in the middle of a storm with temperatures of -33°F.

So it seems the reason we shoot fireworks on July 4th is that we like them and always have. 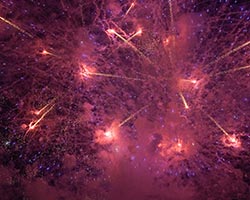 July 4th Fireworks Over the Charles.