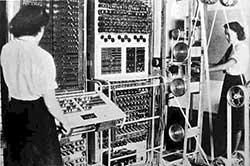 Among the Allies’ greatest off-battlefield successes of World War II was breaking the German’s codes.

Probably best known is the work of computer pioneer Alan Turing in deciphering the code of the Enigma machine. He designed an electro­mechanical device called the bombe to assist him. The Enigma story has been the subject of numerous books, documentaries and even a movie (co-produced by Mick Jagger, who owns an Enigma).

More sophisticated, but not nearly as well known, is Colossus, which was a programmable digital computer used to crack the German’s Lorenz code machine. Colossus is largely unknown because to preserve its secrets Winston Churchill ordered the destruction of most of the machinery and documentation after the war and committed the people who worked on them to silence.

A working model of Colossus has been reconstructed at Britain’s National Museum of Computing. The story is told in detail at Codes and Ciphers, a web site created by Tony Sale, one of the people responsible for rebuilding Colossus.