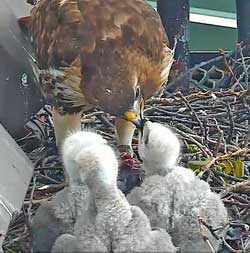 Spring is here and young people’s thoughts turn to … well, the birds and the bees. True birders get up at dawn to catch the best views, but we can all participate vicariously through live cameras connected to the web.

The image at the right was captured from a camera at the Cornell Lab of Ornithology. The video feed includes sound and is available in HD resolution. The lab has several other cameras, as well as links to cameras at other institutions.

Some parents will go to any length to help their chicks get into Harvard. The family at the left built its nest at the Harvard School of Engineering.

And any self-respecting New Yorker wants a home with a view, so NYU’s hawk family built its nest on a 12th floor ledge overlooking Washington Square Park. 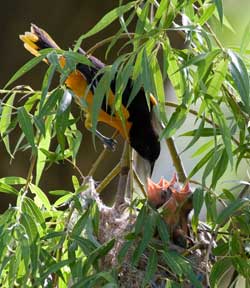 For those who want to get outside, Boston-area bird watchers often favor Mount Auburn Cemetery, noted as a resting station for migrating birds. Their web site lists recent sightings and they have a series of early-morning walks. Those interested in serious research can visit the web site of the Macaulay Library at Cornell, which contains spectacular photos and videos, plus the world’s largest collection of animal sounds.

Finally, I thought I would share one of my own photos of a mother Baltimore Oriole feeding her chicks at Mount Auburn Cemetery.