Last May we visited several nesting bird families through live internet video cameras — two were Ivy League. The Cornell family is back, with three chicks this year (click here to see). Harvard’s returned to campus, but apparently didn’t like us snooping: this year’s nest is beyond camera range.

The internet’s 2014 avian star is a baby albatross in Kauai, Hawaii. Born in January, she still isn’t mature enough to walk properly and won't be able to fly until her feathers grow in. But she has a name, Kaloakulua, has been DNA tested and has 878 Twitter followers. Occasionally a neighboring albatross chick, “Mango,” drops by to visit. You can see “KK” in person at Cornell, Laysan Albatross. 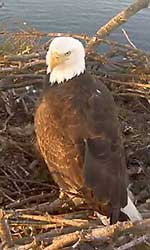 The World Land Trust has a year-round camera watching a bird feeder in the Brazilian Atlantic rainforest. Watch and you will likely encounter species you won't find in your backyard.

If you love breathtaking scenery as well as wild life, visit the eagle cameras overlooking Boundary Bay, British Columbia, Canada. There are two chicks and three cameras: one close-up, another wide-angle, a third showing the bay. Note: the site has switched to new software and you may experience glitches. 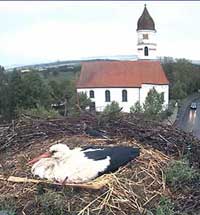 Eagle nests seem to be in vogue, in fact there is a blog called eagleholic devoted exclusively to bald eagles. It provides links to about 30 bald eagle web sites and gives updates when eggs hatch.

The fascination with on-line bird watching isn’t limited to North America. For example, there are a number of “stork” cameras in Europe, including one shown at the left in the Southwest German town of Gögglingen (visit web site. Note, there may be an ad). The site includes a link to a Google satellite view showing the exact location of the nest and the church seen in the background. 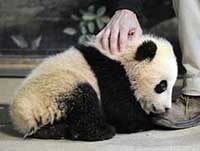 Bao Bao at the National Zoo.2

Our feathered friends aren't the only critters you can watch on-line. There are two cameras watching the pandas at the National Zoo, including baby Bao Bao, born in August 2013. Like mothers everywhere, Bao Bao’s mom, Mei, sometimes has trouble getting Bao Bao to leave the tree and come indoors at the end of the day.

All of this without leaving the comfort of your desk or easy chair. Enjoy.