We usually think of computers as 20th century creations, but people have been building calculating machines for centuries. Probably the first to design a programmable device was Charles Babbage (1791–1871). 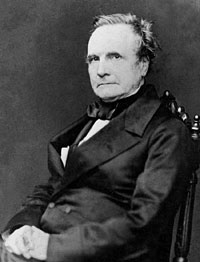 Babbage was Lucasian professor at Cambridge University, a position that has also been held by Isaac Newton and Stephen Hawking. Recognizing that manually calculated mathematical tables contained many errors, he set out to build machines that could do the math mechanically.

His first creation was the Difference Engine. Its gears were designed to compute specific astronomical and scientific funtions. But like a modern calculator, it could only compute the equations built into it; it could not be programmed to do others. 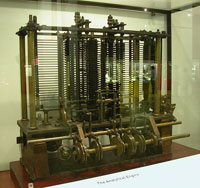 That’s where his Analytical Engine came in. Like a modern computer, it could be programmed; in fact Babbage proposed to use 1950s style punched cards for the input.

Alas, due to funding restirctions and changing designs neither device was completed during Babbage’s lifetime. Fully-functional Difference Engines have been built from his plans — the Computer Museum’s copy can be seen in operation on its web site

Babbage produced thousands of drawings for the Analytical Engine, but the design was never finalized. His drawings have been digitized by London’s Science Museum and a project is underway to build a working Analytical Engine. NY Times, November 7, 2011.