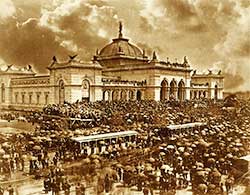 May 10, 1876 was a big day in America. People were gathering in Philadelphia to celebrate the country’s 100th birthday, salute its achievements and begin to heal the wounds that still festered eleven years after the end of the nation’s deadliest war. President Grant was in town to open the Centennial Exposition and dignitaries were arriving from all corners of the Earth to join the festivities.

Meanwhile in Boston. That same morning a 29 year-old Boston University professor, his family called him Alec, was looking forward to his own big day. Shortly after noon he would be giving the first public demonstration of a new invention. His patent called it an improvement in telegraphy.2 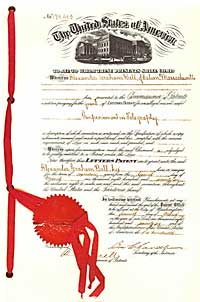 Alec must have been nervous. He had been busily preparing for the presentation and had just written his father that it would be one of the great events of his life. But recent tests of the device had been problematic and his father was reminding him that he needed to focus on earning a living and not spend so much time on his electric hobby. And the audience itself was intimidating, the demonstration was being given at a monthly meeting of the American Academy of Arts and Sciences, a learned society that included some of the top minds in the country.3

The meeting was taking place at the Academy’s office on the ground floor of the Boston Athenaeum, just down the street from Alec’s Boston University office. Wires had been run out his office window and along the street to the meeting room. His fiancée’s brother, Willie, was waiting in the office to operate the sending station.

When Alec was ready for the demonstration to begin, he pressed a button signaling Willie to play music. Suddenly the hymn “Old Hundred”5 filled the assembly hall. As he explained how multiple tones could be transmitted simultaneously, he signaled for Willie to play chords. The room erupted into a round of applause. A long-time member said it was the most enthusiastic reception he had ever seen at an Academy meeting. 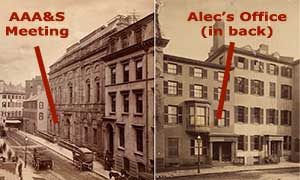 Alec was ecstatic. He was invited to give another presentation at the new Institute of Technology (now M.I.T.) and a reporter from the Boston Transcript was preparing an article about his work.

But reality tempered his enthusiasm. The semester was ending and he needed to attend to his classes. There were also bills to be paid and his mother was warning him that he had to get to bed at a reasonable hour, she was concerned he was killing himself.

Back in Philadelphia. As Spring turned to Summer, the Centennial Exposition continued to draw throngs to Philadelphia. Alec’s lawyer and future father-in-law, Gardiner Hubbard, convinced him to display his invention. Alec sent an improved model that could reliably transmit speech as well as music. It attracted little attention.

Prizes were to be awarded for the best exhibits in various categories. Sunday, June 25th, was the day designated for the judges to view technology displays. Alec went to Philadelphia so he could be present when the judges got to his exhibit, although he felt guilty about abandoning his students, who were waiting for their grades and diplomas. 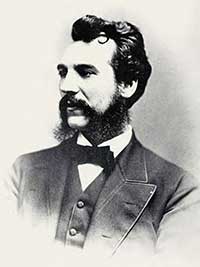 Things ran late on Sunday and when the tired judges got to Alec’s exhibit they gave it a quick look and started to move on. Then one of the judges who had fallen behind came straggling in. It was Emperor Dom Pedro of Brazil. He recognized Alec from having observed one of his classes in Boston and asked how his students were progressing. Alec said they were fine, but that he was in Philadelphia for his exhibit. The Emperor asked for a demonstration and several other judges joined him to watch.

Alec went to the sending station and began to sing — he usually stuck with music at public demonstrations since people would recognize the tune even if some of the words were garbled. Then he decided to take a chance and spoke the words: “Do you understand what I say.” The judges were astounded to hear a machine speak and literally ran to find Alec. They then took turns speaking to each other over the wires.

One of the participants, Sir William Thompson, was so impressed that he went to find his wife so she could hear. Sir William was one of the world’s leading experts on electric theory and telegraphic science. That evening he spoke glowingly of the demonstration over dinner and later he and Emperor Dom Pedro recommended that Alec’s invention be given one of the prizes. It was awarded the Gold Medal.

Today we usually refer to Alec by his full name: Alexander Graham Bell. Presumably his father forgave him for spending so much time on his electric hobby.